In observance of the 124th Philippine Independence Day on June 12, the Philippine Postal Corporation (Post Office) launched the commemorative Stamps to mark the 150th anniversary of the martyrdom of Fathers Mariano Gomes, Jose Burgos, and Jacinto Zamora, collectively known as GOMBURZA. 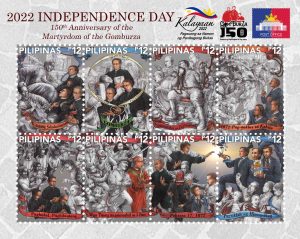 “The stamps illustrate the sacrifices and heroism of Fathers Gomes, Burgos and Zamora who gave their lives for freedom”, Postmaster General Norman Fulgencio said.

On February 17, 1872, a Spanish court martial found three secular priests, Jose Burgos, Mariano Gomes and Jacinto Zamora, guilty of treason as the instigators of a mutiny in the Cavite navy-yard and were sentenced to public execution by garrote in the same year.

Considered as a National Holiday among Filipinos, the annual observance of Philippine Independence Day was signed into a law by former President Diosdado Macapagal through Republic Act No. 4166 on August 4, 1964.

According to Philippine history, the declaration of Independence from the Spanish colonial rule was held on June 12, 1898 by General Emilio Aguinaldo in Cavite El Viejo (Kawit), Cavite.

Post Office in-house graphic artist Israel A. Viyo designed the commemorative stamp, which will be sold at P12 per piece.

The Postmaster General and CEO, Norman N. Fulgencio, joins the Mayor, Dr. Honey Lacuna-Pangan and Vice Mayor Yul Servo with guests of honor at the ceremonial lighting event at the Kartilya ng Katipunan beside the Manila City Hall. In front of Liwasang Bonifacio, meanwhile, the Manila Central Post Office is lit with traditional parol in … END_OF_DOCUMENT_TOKEN_TO_BE_REPLACED