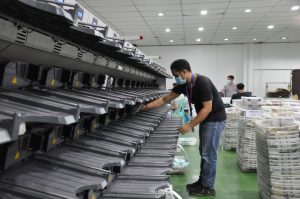 The Philippine Postal Corporation (Post Office) announced that they have delivered the PhilSys IDs turned-over for dispatch to their intended recipients and at the same time clarified issues in the delivery of the said cards.
“Staying true to our mandate to deliver efficient, competitive and on-time delivery of goods and services, we would also like to clarify some issues and be given a chance to answer. So ngayon ang tanong, ang sabi- hindi pa raw nila natatanggap yung IDs nila dahil hindi pa namin nadedeliver (now the question is, they said, they haven’t received their IDs because we didn’t deliver it)”, Postmaster General Norman Fulgencio said.

“There is a way wherein you can verify or check your PhilSys ID. We have a post office website where you can track your IDs. If the result is, NOT FOUND, ibig sabihin noon, hindi pa narereceive ng Post Office ang mga ID (meaning, the PhilSys ID has not been received by the Post Office).”. Wala po sa amin ang problema, yun po ang malinaw dun (The problem is not with the Post Office, let us be clear about it)”, Postmaster General Norman Fulgencio said. 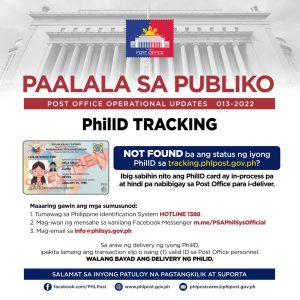 He added, “The Post Office has delivered more than 13.7 million PhilSys ID’s nationwide which is equivalent to 94% of the 14.5 million ID cards turned-over for dispatch as of June 30, 2022.
“Only six percent (6%) or 774,650 ID cards are ongoing or being delivered by the Post Office in far flung areas of the country. We presumed that some of them have already received their IDs as of the moment”, Fulgencio said.
If the result of the tracking service is “not found”, the Post Office advises the public to call the Philippine Identification System Hotline 1388, send them messages via Facebook Messenger m.me/PSAPhilsysOfficial or email them at info@philsys.gov.ph.
“We are given 30 days to deliver the Philsys ID in far flung areas in Luzon, Visayas and Mindanao. In cities it will take us less than 15 days to deliver. Sometimes, we attempt to deliver twice because the recipient’s house is closed. Others are working or transients (moving). We can’t avoid these things”, he said.
“The Post Office and the PSA already discussed doing the Plaza or cluster type delivery– (PHILIDs will be grouped according to barangays or clusters and delivery will be scheduled at a specified location to be coordinated with LGU or barangay officials, to be undertaken by letter carrier/s and other assigned post office employees) in order to address this kind of situations”, he added. 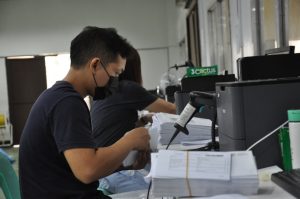 The Postmaster General and CEO, Norman N. Fulgencio, joins the Mayor, Dr. Honey Lacuna-Pangan and Vice Mayor Yul Servo with guests of honor at the ceremonial lighting event at the Kartilya ng Katipunan beside the Manila City Hall. In front of Liwasang Bonifacio, meanwhile, the Manila Central Post Office is lit with traditional parol in … END_OF_DOCUMENT_TOKEN_TO_BE_REPLACED

Request for Quotation- Procurement of printing and delivery of Newsletter