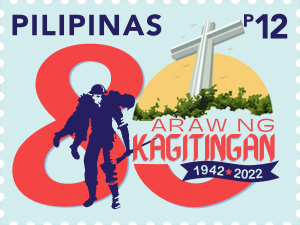 The Philippine Veterans Affairs Office submitted the design of the stamps to promote, preserve, and memorialize the principles, ideas, and deeds of our war veterans, as a means to enhance patriotism and love of country, especially among the youth of the land.

The layout of the stamps was further enhanced by (Post Office) in-house graphic artist Ryman Dominic Albuladora. The Post Office has printed 40,000 copies of the Stamps to be sold at P12 each. Additional 5,400 Official First Day Covers were also printed to be sold to stamp collectors.

“Today, April 9, 2022, as we launch the 80th Araw ng Kagitingan (Day of Valor) commemorative stamps, it is our hope that we continue to ignite our sense of nationalism and cultivate unity in the country as we face the challenges of the future” Postmaster General Norman Fulgencio said.

Filipino and American forces together defended Bataan from the invasion of the Imperial Japanese Army from January 7, 1942 and for ninety-three days, our defenses encountered violent bombings, shelling, infection, and disease. On April 9, the resistance negotiated its surrender, and this day became known as the “Fall of Bataan”.

Every April 09, the Araw ng Kagitingan (Day of Valor) was made a legal holiday through Republic Act (R.A.) No. 3022. Bataan Day was renamed “Araw ng Kagitingan”, to honor both Bataan and Corregidor, through Executive Order No. 203, s. 1987 of President Corazon C. Aquino.

Aside from this national observance, national shrines have been erected to memorialize the bravery of Filipino and American forces during the four-month-long Battle of Bataan, such that the Dambana ng Kagitingan – or the “Shrine of Valor” at Mt. Samat, Pilar, Bataan which was depicted in the commemorative stamps.

Stamps and official first day covers are now available at THE Philatelic Counter, Manila Central Post Office in Liwasang Bonifacio. For inquiries on the stamps, please call (02)8527-0108 or (02)8527-0132 and follow and like Facebook page https://www.facebook.com/PilipinasPhilately/ for updates.

Procurement of supply and delivery of Isoprophyl Alcohol 70%