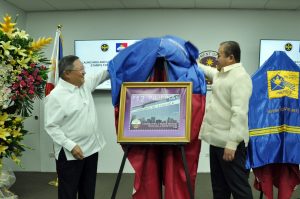 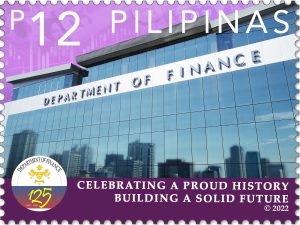 The launching and unveiling of the historic stamp underscore the vital role of the Department of Finance not only in ensuring sound fiscal policy for the government, but also for the responsible management of government resources to provide the Filipino people with infrastructure, education, health and other basic services.

Founded on 24 April 1897, by the Philippine Revolutionary Government, the Department of Finance has undergone various structural and functional overhauls but it has remained a key department of government that promotes public welfare and accelerates economic growth and stability of the nation.

The stamps feature the beautiful façade of the modern DOF Building on Roxas Boulevard, reflected on it is a busy skyline and on the upper left, the Philippine peso; both come to represent the growth and lively progression of the economy. The 125th anniversary seal is affixed on the lower left and this year’s theme spans the lower right of the stamp.

This year’s theme: “Celebrating a Proud History-Building a Solid Future”, reignites our sense of patriotism especially among the young people, leading to a deeper understanding and appreciation of the Philippine economy and society. 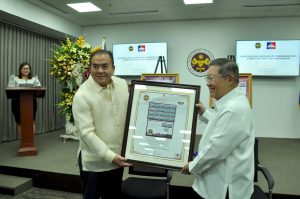 The Post Office has printed 40,000 copies of the stamps at 12 pesos each. In house graphic artist Eunice Beatrix Dabu layout the stamp.

Stamps and Official First Day Covers are now available at the Philatelic Counter, Manila Central Post Office. For inquiries, please call 8527-01-08 or 8527-01-32 or follow/like the facebook page https://www.facebook.com/PilipinasPhilately/ for updates.

The Postmaster General and CEO, Norman N. Fulgencio, joins the Mayor, Dr. Honey Lacuna-Pangan and Vice Mayor Yul Servo with guests of honor at the ceremonial lighting event at the Kartilya ng Katipunan beside the Manila City Hall. In front of Liwasang Bonifacio, meanwhile, the Manila Central Post Office is lit with traditional parol in … END_OF_DOCUMENT_TOKEN_TO_BE_REPLACED

Request for Quotation- Procurement of printing and delivery of Newsletter