The first prize winner will represent the country in the worldwide competition to be held in Berne, Switzerland.

The contest is a yearly event organized by the Philippine Post Office under the auspices of the Universal Postal Union (UPU), which is composed of 192 countries around the world of which the Philippines is an active member. The chosen theme for this year is: “Write a letter to an influential person about why and how to take action on climate change.”.

The Universal Postal Union (UPU), through the International Bureau, has invited youth ages nine to 15 to join its letter writing competition, to strengthen literacy with one theme, making young people aware of the important role postal services play in our societies.

The contest is designed to develop the young people’s skills in composition and the ability to express their thoughts clearly, to foster their enjoyment of letter-writing and to help strengthen the bonds of international friendship, one of the basic missions of the UPU,” the post office said in a statement.

The first prize winner will be awarded P25,000, the second prize P15,000 and the third prize P10,000 plus corresponding medals, plaques and albums of Philippine stamps.

The awarding ceremony will be held on Oct. 9, coinciding with the worldwide celebration of World Post Day. 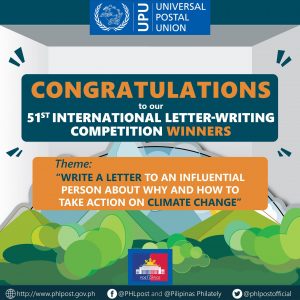 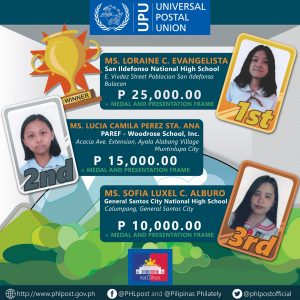 Procurement of supply and delivery of Isoprophyl Alcohol 70%