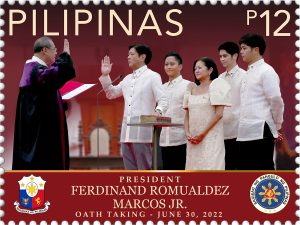 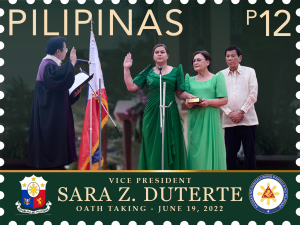 The Post Office released on Nov. 17 the first day of issue of stamps commemorating the historic inauguration of President Marcos Jr., who took his oath as the 17th President of the Republic of the Philippines held at the historic National Museum in Manila on June 30, 2022. 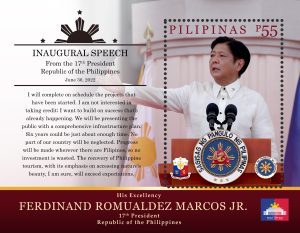 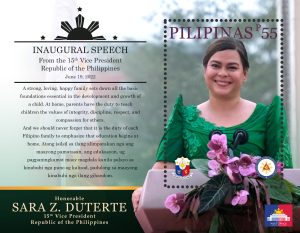 On the same day, a commemorative stamp was also issued to honor Vice President Sara Z. Duterte who took her oath as the 15th Vice President of the Republic of the Philippines, before Supreme Court Associate Justice Ramon Paul Hernando at San Pedro Square in Davao City on June 19, 2022.

The set of stamps features her oath of office, a photo of the inaugural speech, the combined Official First-Day commemorative cover envelope and a souvenir sheet of the inauguration, and the signing of document which was witnessed by her father, former President Rodrigo Duterte, and VP Sara’s mother Mrs. Elizabeth Zimmerman.

“We are not just honoring them by issuing their stamps. We are commemorating a historic event for the country whereby a new president and vice president were elected by the Filipino people. The Post Office being one of the nation’s guardians and recorders of history, we immortalize this significant event through these beautiful and meaningful stamps”, Postmaster General Norman Fulgencio said.

The designs feature the official seals of the Republic of the Philippines and the Office of the President and Vice President respectively.

The launching ceremony for the Presidential and Vice Presidential Inauguration Commemorative Stamps shall be scheduled for a later date.

Stamps and official first-day covers are now available at the Philatelic Counter, Manila Central Post Office in Liwasang Bonifacio. For inquiries, please call (02)8527-0108 or (02)8527-0132 and follow and like our Facebook page https://www.facebook.com/PilipinasPhilately/ for updates.

The Postmaster General and CEO, Norman N. Fulgencio, joins the Mayor, Dr. Honey Lacuna-Pangan and Vice Mayor Yul Servo with guests of honor at the ceremonial lighting event at the Kartilya ng Katipunan beside the Manila City Hall. In front of Liwasang Bonifacio, meanwhile, the Manila Central Post Office is lit with traditional parol in … END_OF_DOCUMENT_TOKEN_TO_BE_REPLACED